Starfishes are the bottom-dwelling invertebrates. Starfishes reproduce by spawning and external fertilization. Thus they produce free-living larvae. These oocytes develop at the early stages of meiosis. In the starfish, polyspermy is prevented by the egg by creating a shock wave. Fertilization is the process of fusion of male and female gamete to produce their offspring. During fertilization, the sperm triggers a series of activities that result in the activation of the mitosis and the development. These processes enable the fusion and the development of embryo with the genes from the sperm. Increased level of calcium at the egg cytoplasm is the basis for the fertilization. During the fertilization of the eggs, the PLC-gamma is activated by the SH2 domain, which in turn stimulates the production of InsP3, which increases the intracellular Ca2+ release. After receiving the calcium signal, the calcium transients, the eggs are moved through the mitotic control points of the cell cycle. The InsP3 production initiates the first mitotic cell cycle of the fertilized egg. The egg cell cycle is stopped until it is fertilized at the G1 of the first mitosis in starfish. The cell then enters the anaphase and they complete meiosis and finally enable the starfish to undergo DNA synthesis. Thus the initiation of the fertilization is by the activation of the PLC. There are many isoforms of PLC. They are beta, gamma, and delta. The PLC gamma is activated by the protein tyrosine kinases (PTK).

1. Sample preparation: Oocytes, eggs, zygotes, and tissues were obtained.
2. The starfish eggs are then lysed using the lysis buffer to separate the proteins from the cell organelle. The lysis buffer consists of 20 mM HEPES, pH 7.0, 150 mM NaCl, 10 mM Na3VO4, 10 mM NaF, 1% NP-40, 1 mM EDTA, 100 mM Naglycerophosphate, 1X protease inhibitor cocktail
3. Protein Assay: The lysed eggs were diluted in the 1% SDS Buffer (1% SDS in water), and the absorbance was read at 562 nm.
4. Polyacrylamide Gel Electrophoresis: The diluted samples are then plated in the 10% acrylamide-bisacrylamide with the stacking gel concentration of 5%. The electrophoresis was performed at 70- 150 V until the separation is clear.
5. Western Blotting: After the electrophoresis is over, the gel was taken out of the tank, and the separating gel of the PAGE containing the protein samples are transferred into the nitrocellulose membrane using the western blotting technique. The transfer of the protein was performed at 1000mA hours.
6. The membrane containing the protein was stored with proper labeling.
7. Antibody blot: The membrane blot was taken and kept in the Blotto. The antibodies were incubated, and the blot was developed.
8. Affinity interaction with the GST fusion proteins: The GST fusion proteins were taken in the PBS. The protein lysate was removed from the freezer and dissolved in the buffer. The proteins were then completely solubilized and spun, and the pellet was removed, and the soluble lysate was separated, and protein assay was performed.
9. Protein Assay: To the 2 l of lysate 798 l of water was water added, and 200l of Bradford reagent was mixed, and the results were observed at 595nm. Finally to the mixture, the GST fusion beads were added and incubated for 1 hr at 4oC with rocking. The beads were then separated, and then the supernatant was saved as unbound. The loosely bound proteins are removed by rinsing it in 5X 1ml TBS buffer. 20l of protein gel sample buffer was finally added to the beads.

10. The beads with the protein are then run in electrophoresis, and the results were observed. 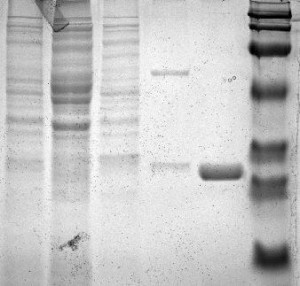